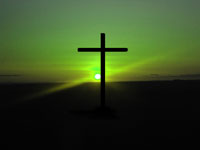 The most fundamental truth of Christianity is the fact that God died for mankind. This fact is an offense to Muslims. In fact, this truth has been a stumbling block for people for thousands of years. Muslims refuse to accept the death of God because they do not know God. They do not understand the power or love of God.

To understand how God could die, we must understand the person of Isa Al-Masih (Jesus Christ). If Isa was just a mere man, as Islam believes, then God did not die. To believe that you have to deny God’s Holy Word. According to the Injil (Gospel), Jesus was God clothed in flesh. The Injil tells us, “…the Word [Isa] was with God and the Word was God…” (Injil, John 1:1). Isa Al-Masih is the eternal Word of God.

Can the Eternal Word of Allah Be Destroyed?

The Quran Is Paper and Ink. Isa Al-Masih, the Eternal Word of God, Died on the Cross.

In the same way, Isa is the eternal Word of God. He took the physical form of the body of a man (not paper and ink). The human body, as we all know, can die. It is destructible. Nevertheless that does not mean the eternal Word of God ceased to exist at the crucifixion. After the physical death of His mortal body, Isa Al-Masih rose again. In his eternal body, He ascended back to the Father. Isa said after he rose from the dead, “… I am returning to my Father and your Father, to my God and your God” (Injil, John 20:17).

The Word in Paper and Ink, the Word in a Human Body

If a Muslim believes that a Quran made of paper and ink can be destroyed without destroying the eternal Word of Allah, why is it so hard to accept the death of the true Word of God? This should not cause offense to the Muslim, but rejoicing. God visited man! The eternal Word of God in the form of man allowed Himself to be destroyed in the flesh. Thus, we can be made alive in His resurrection. Isa Al-Masih said, “I am the resurrection and the life. He who believes in me will live even though he dies” (Injil, John 11:25).

Do You Believe in the Eternal Word of God?

[We invite you to visit us at https://www.isaandislam.com/way-of-salvation to learn more about God’s Gift of Salvation.  God loves you and waits to hear from you. Isa clearly said, “I am the way, the truth, and the life. No one comes to the Father except through Me” (Injil, John 14:6). For a deeper understanding of Isa we suggest you subscribe to “Isa, Islam, and Al-Fatiha” at this link.]