Muslims often reject the idea of Allah as Father. But the Holy Books share why it’s important that Allah is a Father to his people. Let’s think about why Muslims need God as Father.

No Father in Islam

Muslims speak fondly of the “Ninety-Nine Beautiful Names of Allah.” But, Father is not one of them. Barak Obama said it was costly not having a human father.  Is it costly for Muslims not to have a heavenly Father? Perhaps there are yearning hearts like that of Bilquis Sheikh.

“I Dared to Call Him Father” Bilquis Sheikh (1912-1997) came from a prominent Muslim family in Pakistan. She was searching to know Allah. A Christian doctor suggested that she pray to Him as a Father.

She did, crying out, “Father, oh my Father God.” He spoke to her.

Then she asked God about the Quran and the Bible. “Which one is your book?” she asked. She heard a voice say, “In which book do you meet Me as your Father?”

Of course, it was the Bible. She became a follower of Isa Al-Masih. She told her story in the book, “I Dared to Call Him Father.”

The Father Who Cares The Torah and Zabur tell us that Allah (God) is a caring Father. “Sing to God … His name is the Lord – rejoice before him. A father to the fatherless, a defender of widows …” (Zabur 68:4-5).  Allah (God) the Father cares about you in your joys and in your pain.

The Father Who Loves

John, the disciple of Jesus, was overwhelmed by the Father’s love. He wrote, “How great is the love the Father has lavished on us, that we should be called children of God!” (Injil, 1 John 3:1).

What a privilege to have this special relationship with the God who created the universe, to be His children and to have fellowship with Him!

The Father Who Prepared an Eternal Home 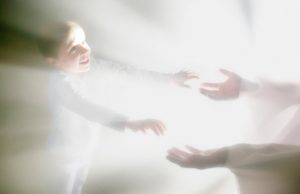 Isa Al-Masih (Jesus) comforted His children. “Do not let your hearts be troubled. Trust in God; trust also in me. In my Father’s house are many rooms …” (Gospels, John 14:1).

Isa Al-Masih (Jesus) went on to say if that were not so, He would go and prepare a place for them. Then he “… will come back to take you to be with me that you also may be where I am” (Gospels, John 14:3). Heaven will mean being with the Father (Allah) forever.

Isa Al-Masih (Jesus) Is The Way to the Father

“Jesus answered, ‘I am the way and the truth and the life. No one comes to the Father except through me’” (Injil, John 14:6). God wants to be your Father too.  Call out to Him in the name of Isa Al-Masih (Jesus).