Isa And Islam > Frequently Asked Questions > Isa Al-Masih > Where Is the Body of Christ? Why does it matter if Isa Al-Masih rose from the dead? If Isa did not rise, then millions of His followers have lived for a lie. If Isa did rise, then He is still alive.

The Apostle Paul wrote, “He was buried. He was raised from the dead on the third day, just as Scripture said he would be. He appeared to Peter. Then he appeared to the Twelve. After that, he appeared to more than 500 believers at the same time. Most of them are still living. But some have died” (Injil, I Corinthians 15:4-6).

Jesus’ body was taken off the cross, wrapped in grave clothes and covered with spices. Then it was placed in a tomb. An extremely large stone was rolled in front of the tomb’s entrance.

Roman soldiers were placed out front to guard the grave. Severe punishment waited for any soldier who left his post. On Sunday morning, women went to the tomb to find the stone rolled away and the body gone, but the grave clothes were still there. What happened?

Some say that Christ’s friends stole the body. This means that either one of the women distracted the guards while the other two moved the stone and walked off with the body, or Peter and

John overpowered the guards, stole the body and made up a myth.

These theories do not seem possible. The guards were too powerful, the stone was too heavy, and the disciples were too afraid.

Others say that Christ’s enemies stole the body. Yet if the Romans or Jews had the body, they would have exposed it publicly and Christianity would have died.

Another idea is the “swoon theory.” This theory states that Christ didn’t really die but was only unconscious. The Roman executioners only thought He was dead. After a few days in the tomb, the cool air revived Him. Then, He burst out of the grave clothes, rolled away the stone, and scared the Roman soldiers. He then walked miles on wounded feet and convinced His disciples that He’d risen from the dead.

The Appearances of the Risen Christ

For 40 days after His death, people reported seeing Christ alive on earth. Some say these were hallucinations but do the accounts show that?

A woman, a tax collector, and more than 500 people at one time claimed they saw Him. Groups of people do not have the same hallucination. But over 500 people saw the same thing at the same time and place.

The Risen Christ Was Not a Hallucination

Two other facts undermine the hallucination idea. Such imaginations are usually of expected events, yet the disciples had lost hope after the crucifixion. Psychic phenomena usually happen in cycles, but Christ’s appearances came in no set pattern.

The Facts Point to One Conclusion: Christ Has Risen from the Dead! 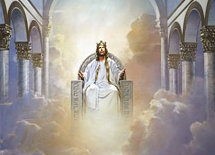 The above does not form a thorough proof, but rather a reasoned examination of the evidence. Major evidence comes experientially, in personally receiving Christ as Savior and Lord. Jesus said, “Behold I stand at the door and knock; if any one hears My voice and opens the door, I will come in to him” (Injil, Revelation 3:20).

We encourage our readers to comment on the article above. Comments that don’t directly relate to the topic will be removed. Please start a dialogue with us by focusing on one of the following questions:
1.) Why does it a matter that Isa rose from the dead?
2.) Why were there many stories that were made up regarding his death and resurrection?
3.) What are the evidence that Isa died and rose from the dead?