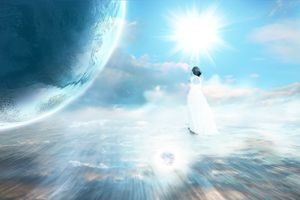 Many religions teach about heaven and hell. Heaven is a beautiful place. Hell is a terrifying place.

In Islam, there are Hadith that say Allah will save some Muslims from hell. Then Allah will punish Jews and Christians in exchange for Muslims. Is that really true? Allah Will Punish Jews and Christians In Exchange for Muslims

“When it will be the Day of Resurrection Allah would deliver to every Muslim a Jew or a Christian and say: That is your rescue from Hell-Fire” (Sahih Muslim Book 037, No 6665).

Muslims Are Responsible for Their Own Lives

This teaching requires a closer look. Several verses in the Quran (Qs. 3:25, 14:51; 20:15; 45:22) teach that every person is responsible for the good and bad deeds committed in his/her life. Is this teaching consistent with the teaching of the Hadith where Allah places the sins of Muslims on Jews and Christians? Only Some Muslims Will Be Saved

According to some Hadith, only a group of Muslims will be saved from hell. Allah will punish Jews and Christians by making them suffer in hell in exchange for the sins committed by Muslims.

Sacrifice for All Sins

In the Torah God gave laws on how the people were to atone for their sins. They were to offer a lamb as a burnt offering (Torah, Leviticus 5:14-6:7). This lamb offering was to pay the price for their sins for that year.

Allah holds every human responsible for his/her own sins. Therefore, people must atone for their sins through an offering. However, an animal sacrifice was never good enough to gain eternal life and salvation, as they had to do it every year. Christianity teaches something similar: Allah punished Isa Al-Masih as a substitute for all people’s sins—past, present and future. Out of love, Isa Al-Masih was willing to take your place and take the punishment for all your sins (Gospels, John 3:16). Isa Al-Masih became the perfect final sin offering forever.

Therefore, you do not have to be punished in hell. Isa Al-Masih has already taken the punishment for all your sins.  All you need to do is believe in His sacrifice and follow Him (Injil, 1 John. 2:2). Do you want Isa Al-Masih to take your sins away?

Please contact our staff if you want to know Isa more.