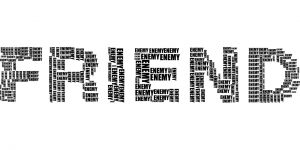 Reno and Vita are lovers who were planning to marry. However, Vita recently met a former lover. While studying abroad in Sakura they reconnected. Now Vita is confused. The former lover is trying to hinder Vita’s marriage to Reno.

No doubt you have heard such stories. Some marriages fail because an intruder gets involved; because a “friend” was really an enemy.

Something similar happens in the spiritual realm. Many people who seek Allah never find Him. They are hindered by Allah’s enemy.

Iblis is the enemy of Allah. He is seeking to keep you from knowing Him. What can we do?

The Quran and Injil give us an example of this. “He (Iblis) said: ‘Because You have thrown me out of the Way, lo! I will lie in wait for them on Your Straight Way’” (Qs 7:16). In the Injil we read, “Your enemy the devil prowls around like a roaring lion looking for someone to devour” (Gospels, 1 Peter 5:8).

Isa Al-Masih is the Straight Way

The Gospels tell us that about 2000 years ago, Allah sent His Word as the Way. “The Word became flesh and made his dwelling among us” (Gospels, John 1:14). Later, Isa Al-Masih, Allah’s Word, said, “I am the Way and the Truth and the Life. No one comes to the Father except through me” (Gospels, John 14:6).

Many people do not believe this message. Since Iblis is the enemy he hinders them and deceives them so they will not believe in Isa.  Do you believe Isa is the Straight Way? Send your answer here.

Iblis sought to hinder Isa Al-Masih from fulfilling Allah’s plan. He tried to keep Him from dying on the cross. If Iblis had succeeded in this, Isa couldn’t have said, “I am the Way . . .”

While Isa Al-Masih was still a baby, Satan incited King Herod to murder Him. Later, when Isa was about to begin His public ministry, Satan tried to destroy Him through temptations (Gospels, Matthew 4:1-11). Iblis was Unable to Defeat Isa

Allah is Almighty and Sovereign. He never left Isa Al-Masih. Iblis was unable to hinder or overcome Him from fulfilling the purpose for which He came.

Isa also rose from the grave in victory. By His death and resurrection He completed Allah’s plan of salvation. Satan was defeated. Now all who trust in Isa Al-Masih walk in the “Straight Way.”

Perhaps you are confused and in doubt. This is Satan’s strategy. He wants to hinder you from finding the Way to Allah.

[We invite you to visit us at http://www.isaandislam.com/way-of-salvation to learn more about Allah’s gift of Salvation. Allah loves you and waits to hear from you. Isa clearly said, “I am the way, the truth, and the life. No one comes to the Father except through Me” (Injil, John 14:6). For a deeper understanding of Isa, we suggest you subscribe to “Isa, Islam, and Al-Fatiha” at this link.]