I began my religious journey when I was 18 years old. I am now 76. In earlier years I felt guilty if I doubted some religious teachings, but no longer. Now I am quite comfortable when my skepticism surfaces, as I am convinced that it actually strengthens my faith.

The Importance of Being Skeptical

Religious leaders often silence their followers when they express doubts about some belief with an authoritative command, “Just believe, don’t ask questions.”

This is tragic. Religious people should be skeptical. God has given us minds to think and inquire. A skeptical attitude can protect us from false teachings.

The Earth Is Flat, Not Round

Did he test his idea scientifically?  Why did he reject the view of other leading Christians who believed the earth was round. Sadly, Lactantius was not skeptical of his views.  Shouldn’t we be skeptical of the teachings of religious teachers? Perhaps they are like Lactantius.

Women Determine the Gender of a Child

Through the centuries religious leaders have blamed wives when they did not bear male children. Many husbands divorced their wives or took more wives if the first wife did not give them a male heir.

Science now proves that a child’s gender is determined by the husband’s chromosomes, not the wife’s.

Over the centuries religious people and leaders held to a false belief. Sadly, they were not skeptical of their belief and many wives and families suffered as a result. 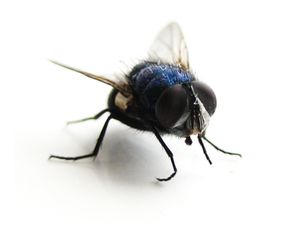 Hadith about Flies and the Killing of Bacteria

The Prophet said, “If a house fly falls in the drink of anyone of you, he should dip it (in the drink), for one of its wings has a disease and the other has the cure for the disease.” (Sahih Al-Bukhari: Volume 4, Book 54, Number 537)

Here is what the medical world says: There are many bacteria and parasites that infest the fly, making flies a major factor in spreading many diseases by touching surfaces with their legs or their saliva. After walking on much excrement, flies may carry up to as many as 6 million bacteria on their feet. So be wary of foods that have been touched by a fly!

Why did Muhammad talk about the fly’s wings, when the main source of infection are their feet?

Be skeptical–throw out the drink!

A skeptical and wise person will reject Muhammad’s Hadith of the Fly. He will wisely avoid consuming a drink that was a swimming pool for a fly!

All the Apostles, except Thomas, met Jesus shortly after His resurrection. When they told Thomas about this, he was skeptical.

“Unless I see the nail marks in his hands and put my finger where the nails were, and put my hand into his side, I will not believe it.” (The Injil, John 20:24-29)

When Jesus Christ appeared again to the Apostles, He asked Thomas to place his finger into the wounds. As a result Thomas also believed.

Although Thomas was a skeptic and doubted Christ’s resurrection, Jesus did not scold him. Instead Jesus helped Thomas overcome his doubts.

It is not wrong to doubt religious teachings. Wise leaders will welcome questions and doubts. Like Jesus, they will help you seek truth.

Are you a skeptic or have questions about some teachings? Our staff will be happy to assist you. Please contact us.

1. Have you ever been berated or scolded when you expressed doubts about some religious teaching?

2. Do you drink your water if it has been polluted by fly bacteria? Do you believe the Hadith or modern science? Why?

3. According to your viewpoint, should religious people be skeptical? Do you have other examples of doubtful teachings? Explain.